Lead – who are your three?

We just love Karl’s handwritten notes and drawings dotted throughout Lead and think they really bring his message to life.

Here is a short extract from the book, alongside one of those beautiful illustrations:

The primary function of leadership is not to attract followers but to lead leaders.

This is often quoted but rarely walked out. Jesus knew that if something was worth doing, it was worth doing averagely by successors, rather than doing brilliantly by himself. Leader, I know it is a tough teaching, but your competency, efficiency and brilliance at doing the thing that God has gifted you to do, could well be the very thing that is killing the thing that God has called you to do. Your calling is to lead, and that call is beyond you, so you must make space.
‘No’ is your strongest weapon. Use it. Say ‘No’ to good so that you can say ‘Yes’ to best.
For succession to be successful there has to be a relational process. Those I apprentice orbit around my family and my house and become my friends. Anything that is going to become a movement must be built relationally. If you get to the end of the process of releasing those who will succeed you and the relationship is still held together by structure, you have not done it Jesus’ way and it is unlikely to last.

Who are your three?

If Jesus was always making a journey from the crowd to the three, most leaders spend most of our time trying to make the opposite journey: from the three through the twelve and seventy-two to the crowd. Not only is this not the way of kingdom succession, it doesn’t work! If you want a crowd, you don’ t get one by trying to get a crowd – you get one by building into the three.

It seems to me the real genius of Jesus’ plan is his apprenticeship of the three. It is Peter, James and John who get the most direct input from the head of the church and it is they who end up leading the fledgling church.

Lead can be purchased by clicking here. 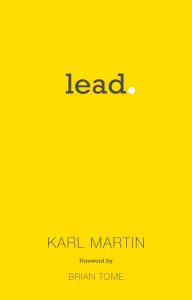